The Immaculate Conception of Mary 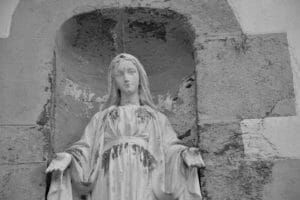 On Saturday, December 8th, we celebrate the feast of the Immaculate Conception of Mary. We recall God’s care for us from the first moment of creation and God’s call to participate in spreading justice and peace.
Last week the Senate voted to open argument on continuing aid to the Saudi-led military operations in Yemen. If successful, the United States would cease support for military not targeting al—Qaeda or associated
forces. In August, the United Nations Human Rights Office reported that since March 2015 up to 23 August 2018, 6,660 civilians were killed and 10,563 injured. The report included accounts of a “pervasive” pattern of physical and sexual violence against civilians and the use of child soldiers, some as young as 8, by both sides of the conflict.  In addition, the rising cost of food and increase in poverty has caused Save the Children to issue an emergency alert station: “More than 11 million children urgently need lifesaving assistance.”
The UN has been attempting to bring together the opposing parties in Sweden to negotiate an end to the conflict and to establish a way for humanitarian aid to be delivered to the war-torn country.  In this Advent season when we celebrate Christ as Prince of peace, let us pray for peace for the people of Yemen and for the world.