In the Darkest Night 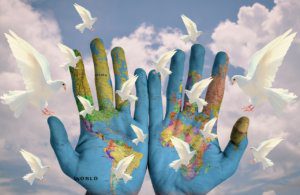 Mary’s title as Morning Star comes in part from the Song of Songs in which the speaker marvels, “Who is this that comes forth like the dawn,… .(6:10). In the darkest night, Mary joins her prayer to ours, reminding us that her Son has promised to share our burdens. We recently watched in horror as video clips showed infants shaking uncontrollably, men and women lying in the streets, struggling to breathe, and men carrying bodies of dead children– all victims of an apparent nerve gas attack in Syria, allegedly launched by the Syrian government. According to CNN, at least 70 people were killed in the attack, including 10 children, and many more people have been wounded. Our Blessed Mother invites us to pray for these and all our brothers and sisters who are suffering the effects of violence and to pray that our civic and religious leaders may guide the world toward a lasting peace.