“I’ve been to the mountaintop” 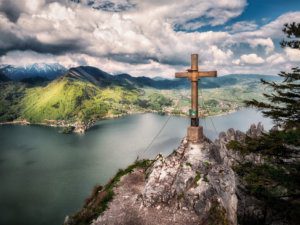 During last week’s services commemorating the fiftieth anniversary of Dr. Martin Luther King, Jr.’s assassination, we heard his strong words of vision, hope and possibility “I’ve been to the mountaintop.” Like Moses looking over the promised land from Mount Nebo, Dr. King looked to a blessed future time when all people would be respected and so would live in peace. This Easter season, all Christians have been to our spiritual mountaintop, for we have seen God’s promise fulfilled in the risen Christ. We recall Jesus’s announcement that the kingdom of heaven is at hand. We profess our belief even as we hear news of trade wars, sex scandals and plans to deploy the National Guard to our southern borders. The kingdom is here, but we must live it into fullness, an overwhelming task unless we follow Mary’s example of pondering God’s mysterious ways and saying yes to God’s love in our daily lives.